'Aries' is a 50ft x 12ft new build 'along the lines of' a Leeds & Liverpool 'Short Boat' and mimics (in steel) the shape of the canvas covered cargo hold of the originals like Kennet (click on link to see more). 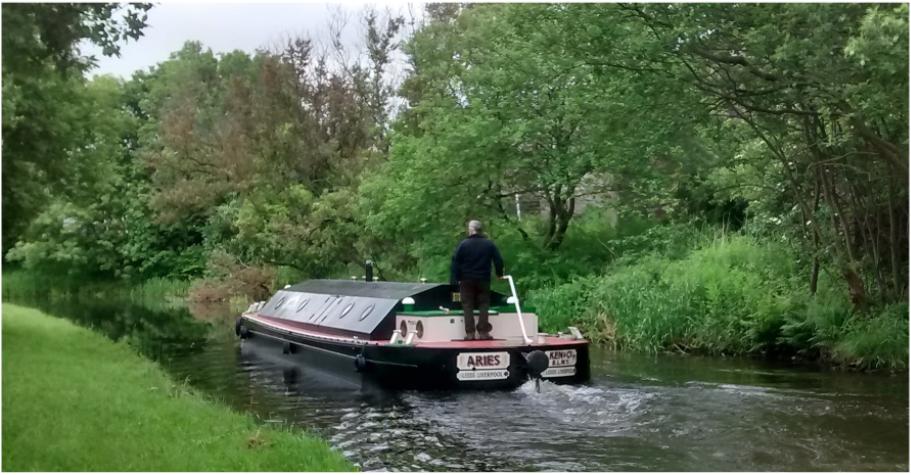 Aries has many traditional features but has modern conveniences and is fitted as a live-aboard, even though I am unlikely to ever make her my regular home.

Steelwork is by XR&D completed end of October 2010, so I have the mammoth task of fitting her out. Click HERE for photos & progress reports or HERE for detailed specifications.

The engine is a Petter PJ2WM (1620cc direct injection twin cylinder) built in March 1971. I am often told "It can't be powerful enough, surely!", but at 22.5 bhp it has more power than many original Short Boats were built with. Those boats were more than twice the displacement of Aries when loaded.

Of course at 1200 rpm it will be producing as much torque as many similar size modern engines would. Those engines claim much higher maximum power output, which they achieve at high engine speeds. After all, it's torque at low revs rather than maximum power that is important for turning a propeller.

The Markon generator is also on a Petter diesel, in that instance a Mini Twin (AC2W) engine (see below).

Direct 'space' heating is by Dickinson diesel Cookstove (galley), cast iron multi fuel stove (saloon) and Refleks diesel Stove (fore cabin). Underfloor Central Heating and domestic hot water is by waste engine heat, surplus heat from the diesel cookstove, Eberspacher diesel Boiler and, when a shore supply is available, Air Source Heat Pump.  The Eberspacher or heat pump also supplies radiators in the saloon and bathroom when rapid warm-up is required. Unfortunately, all of the components are of foreign origin as there are no British units available.

I was keen to use a range of heating methods according to availability of fuels as well as minimizing the waste heat dumped into the canal.

Control of the under floor heating is done using simple mixers and gate valves rather than the high tech sophisticated mains equipment that is becoming the industry standard. The heat pump unit will only be used when shoreline mains is available.

In the galley, the Dickinson Pacific cookstove provides water and space heating as well as hotplate and oven. Furthermore, it does so with minimal use of electricity. The water coil contributes heat into the 'central heating' circuit whenever it reaches 50 degrees. The cookstove can also benefit from fan assist when it needs to work hard. Designed for use on diesel fuel, it seems to be capable of burning a mixture of diesel and waste oil (when available).

In the saloon, I have installed a multi-fuel stove to use when free wood is available and I also have a small Refleks diesel Stove, for the fore cabin, that should run OK on the diesel/waste oil mixture.

Finally, there is also an Eberspacher boiler for those occasions when shore line is not available and I just want programmable, thermostatically controlled heating without running the genny and without any input from me.

On the electrics side, apart from the Rutland wind generator and the Petter/Markon generator, much of the equipment is of foreign origin. While I would have preferred my traditional English boat to have all British made equipment, it just isn't available: even the British companies selling under their British name (e.g. Sterling Power) source the manufacturing from abroad.

It is Victron for the Inverter/Charger and battery monitoring and Sterling for boosting battery charging from the propulsion engine.

There is a large bank of domestic batteries so that moderate amounts of electric cooking won't always require the engine or generator to be running. However, the genny will provide up to 7kw of power when needed and the Victron Unit will be capable of topping up the shoreline with an additional 3kw for short periods.

There are also a couple of small solar panels and in due course will be the (British made) Rutland wind generator previously mentioned to reduce my dependence on the shoreline and/or diesel generator.

When the weather discourages use of the cookstove, a double induction hob, combination oven and halogen oven are available in addition to small appliances such as electric kettle, pop-up toaster, sandwich toaster and electric frying pan.

My only concession to lpg will be a portable barbecue: there are some things that just have to be done when the sun is shining.

For more about Low Carbon heating on a live-aboard, click HERE.